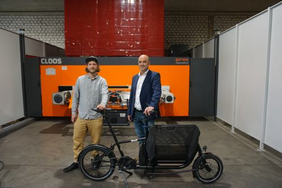 Köln/Haiger – A cargo bike that is fast and agile, that can easily be taken on the train and parked in a normal bicycle cellar – its compact design makes the muli ideal for everyday use in the city. For welding, muli-cycles GmbH in Cologne relies on an automated solution by CLOOS. Thanks to the flexible design of the system and the use of different welding processes such as MoTion Weld and Vari Weld, the robot can weld different steel and aluminium components with consistently high quality.

An alternative to the car
"Our bicycles are compact and at the same time can easily transport large loads," says Jonas Gerhardt, who runs the start-up company together with his brother Sören Gerhardt. "We want to get more people excited about cycling and drive cars further away from the city centres." In 2015, they began developing the muli. At that time, Sören Gerhardt was about to complete his master's degree in product design. Industrial mechanic Jonas Gerhardt, who had completed his apprenticeship and first years of work at CLOOS, was just doing a technician apprenticeship. "Our goal was to offer an alternative to the car and to transfer the benefits of large cargo bikes to a compact bike," Jonas Gerhardt explains. "We then designed and built the first prototypes. The riding experience was so great that we kept working on it."

Since the start-up capital was initially lacking, the two brothers started a very successful crowdfunding campaign in which they more than doubled their funding target. From this project muli-cycles GmbH emerged in 2017, which initially produced in Driedorf in the Westerwald. The company moved to Cologne at the beginning of 2021. In the meantime, the muli is firmly established on the market and is considered a pioneer in the compact cargo bike segment. The Gerhardt brothers are continuously developing their cargo bike, not least because of personal motivation. "We both have small children who we cycle through the city every day," explains Jonas Gerhardt. That is why the muli is now, for example, the first cargo bike with an optional hammock seating system that can be integrated in both directions of travel.

Sustainability in focus
"Our customers very much appreciate that we are committed to the ideal of sustainability with the concept, the production and the entire business model of muli-cycles," Jonas Gerhardt emphasises. "This allows us to guarantee fair working conditions and high environmental, social and quality standards."  For example, the production of the muli – from frame manufacture to powder coating to final assembly – takes place entirely in Germany. In addition, the Cologne-based company relies on local suppliers.

In the first year, Jonas Gerhardt built the bikes himself. In the meantime, the company employs 16 full-time and nine part-time employees in different areas. The distribution network now includes almost 100 specialist dealers around the world. "The boom is huge," Jonas Gerhardt says happily. “We can hardly keep up with the production.” Since its founding in 2017, the company has grown by more than 100 percent every year, so that it now produces wheels in the 4-digit range every year.