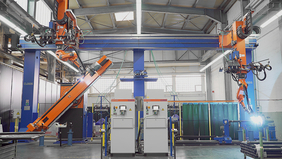 CLOOS, based in Haiger (Hesse) is one of the leading companies in welding technology. In its large, automated robot welding systems, CLOOS uses ROBA®-topstop® safety brakes by mayr® power transmission to safeguard its gravity-loaded axes. These brakes are designed for application in all installation positions and provide reliable protection for people and materials.

Whether construction machines, rail vehicles or in the energy, automotive or agricultural sectors – Carl Cloos Schweißtechnik GmbH realises production solutions for numerous branches. The company’s strength lies in particular in its wide-ranging competencies, as at Cloos it is possible to obtain welding technology, robot mechanics and controls as well as positioning, software and sensors all from a single source. This year, the company is to celebrate its 100-year anniversary. “mayr brakes are used in our large, automated robot welding systems, meaning everywhere where thick steel plates are welded together – for example for construction machines, railways or tractors”, explains Dipl.-Ing. Dirk Haubrich, Head of Mechanical Design at CLOOS. “Amongst other things, these brakes are installed in our gravity-loaded stroke axes. From a certain size or a certain weight, a redundant system simply is required. The ROBA®-topstop® brakes act as a second brake in the safety system and ensure that the 2 to 2.5-tonne loads do not drop. They allow us to guarantee the safety of people and machines.”

Reliably sealed
In addition to the stroke axes, which come in both toothed rack and ball screw drive designs, the ROBA®-topstop® brakes can also be used for eccentrically-loaded axes of rotation. The brakes are generally integrated into the motor adapter of STÖBER gear units. STÖBER Antriebstechnik GmbH & Co. KG in Pforzheim is a long-standing cooperation partner of mayr®.

mayr® supplies STÖBER with the ROBA®-topstop® brakes in modified form so that the brake with plug-in coupling replaces the motor adapter otherwise used. STÖBER has designated this modified product ServoStop. Gear units with integrated ServoStop brakes can be combined with almost all gear units. “As we use the motor gear units in all installation positions, we place particularly high requirements on the tightness of the motor adapter”, emphasises Dirk Haubrich. “We have applications on which more than 20 litres of gear oil press down on the motor adapter seal from above. No oil may leak from the gear unit into the brake, as the consequences would be disastrous.” For this reason, mayr® power transmission supplies specially-adapted and designed safety brakes to STÖBER Antriebstechnik GmbH & Co. KG.

Maximum safety
The valid standards specify a dual brake system design for gravity-loaded axes. “As experts for positioning axes of up to 60 tonnes, we test both systems for function independently of each other in the control system especially developed by CLOOS”, explains Stephan Pittner, Head of Automation at CLOOS.