Quick, flexible and in top quality 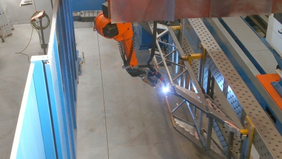 Karlsruhe/Haiger – Fire brigades all over the world use vehicles from Rosenbauer Karlsruhe GmbH & CO. KG. The international technology leader for aerial rescue vehicles fully relies on Carl Cloos Schweisstechnik GmbH for automated welding. With a total of three QIROX robot systems, Rosenbauer welds various ladder elements for the aerial rescue vehicles. By changing to the automated welding technology, the company can respond even more flexibly to customer requirements, saves time both in welding and in secondary processes and achieves excellent welding results.

Already since 1905, Karlsruhe has been the innovation location for fire fighting. Maschinenfabrik Carl Metz was founded in 1842 by the researcher of the same name who was specialised in the manufacture of fire extinguishing and rescue equipment. After the death of the founder, the company headquarters were moved to Karlsruhe. Since 1998, the traditional company has been part of Rosenbauer International AG. Today, the more than 470 employees in Karlsruhe develop and manufacture more than 200 aerial rescue vehicles per year. The vehicles are manufactured flexibly according to individual customer requirements. "Many countries to which we export have their own standards that we have to observe. This is reflected in the increasing number of variants," explains Hans-Peter Lörch, Operations Manager at Rosenbauer Karlsruhe. For this reason, there is a large number of different aerial ladder types, each of which varies in height, width or even in the distance between the handrails. The aerial ladders are manufactured for operating heights of 20 to 64 metres.

Three QIROX Robot systems
Since the middle of 2019, the aerial ladder elements have been welded with two identical QIROX robot systems. The robot is mounted here in overhead position on a linear track with vertical and horizontal stroke. This considerably enlarges the robot working space so that it can flexibly move in all directions.

The robot can always be in an optimum position for welding long and large-volume workpieces. The aerial ladders are inserted between two workpiece positioners, each with a vertically arranged faceplate. The workpiece which is fixed between the faceplates is turned into the optimum processing position by a horizontal turning axis.

Another compact robot system has been welding the basket arm for the articulated ladders and various small parts since 2016. Here, the welding robot is mounted overhead on a floor-mounted linear track which moves it horizontally. The workpiece positioner with counter bearing has two vertically arranged faceplates between which the workpiece is mounted.

Sensors ensure excellent weld seam quality
In addition, the robot systems are equipped with online and offline sensors to compensate for any component tolerances. When using the laser online sensor, the tracking section is measured online during welding. The laser head which is mounted parallel to the processing point sends a laser beam onto the workpiece surface, receives the reflected radiation and transfers the measured results to the robot controller. Here the data is evaluated in order to compensate for material tolerances and heat distortion. Based on the new values the system changes the position of the welding torch and adjusts the process parameter. The online sensor carries out corrections immediately, thus ensuring optimum welding results.

"Our aerial ladders are filigree components that have to withstand high loads," emphasises Lörch. "Deviations of the component quality are not permitted." For this reason, each component is checked for optimum quality by a certified welder before further processing. The consistent, reproducible weld quality and minimised weld spatters considerably reduce the rework times.