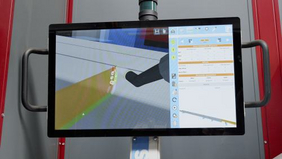 Kalkar/Haiger - As a future-oriented partner for steel and structural engineering solutions, Schwevers attaches great importance to innovative solutions in industrial and commercial construction. With the intelligent robot system from CLOOS, the company not only convinced its customers with its usual professional handling of projects, but also the employees. Thanks to the minimal programming effort and the simple operation of QIROX RoboScan, even workpieces in batch size 1 can be welded automatically today.

"I was looking forward to the system," says Maximilian Vogt, who as a system operator had no previous experience with robotic systems. "The system was so easy to understand that I could already operate it after a basic robotics course. And it's really fun to work with." Until the end of January, he only knew manual welding and welcomed the decision of the company on the Lower Rhine to simplify everyday work with an automated solution in production.

The specialist for warehouses and production halls moved its location from Geldern to Kalkar in 2012 in order to meet the highest demands on the approximately 21,000 m² site with currently 63 employees. More than 60 % of the business partners of the long-established company are existing customers who appreciate Schwevers' experience and competence in cost- and quality-conscious hall construction - from consulting to assembly and execution. From conception to turnkey halls, the company offers functional, flexible and creative construction projects with steel.

In November 2020, the CLOOS robot system was installed in order to generate programs for automated welding with QIROX RoboScan in the shortest possible time. Since the end of January 2021, the system, which was individually developed for their requirements, has been in use in production.

New technology inspires employees
It is the first robot system for Schwevers Stahlhochbau GmbH & Co. KG. It was therefore important to the company that the fully automated system fulfilled the highest safety requirements. In addition, the decision-makers ensured that the system operators did not need to have detailed knowledge of robots in order to be able to work with QIROX RoboScan. With this investment, the hall builder is reacting to the changes in the course of digitisation and wants to take advantage of new technological possibilities at an early stage in order to gain experience in the field of automation.
The robot system expands the inventory of the existing 16 welding power sources from CLOOS, such as the QINEO Pulse. "We have been welding and trusting CLOOS for decades," explains Heinz Schwevers, Managing Director of the company, adding with a smile: "CLOOS welding machines existed in the company before me."

The decision for automation was already made at the beginning of 2020. Because the programming effort for automated welding of small batch sizes is often disproportionately high, especially in steel and metal construction, the decision was made in favour of QIROX RoboScan. One of the selection criteria was the easy handling of the system. Every welder should be able to work with it. And thanks to the employees who were involved in the project from the beginning, the introduction succeeded quickly. Even the employees who were sceptical at the beginning were quickly convinced of the new technology.

"We wanted to support our manual welders with the possibilities that automation offers. In this way, they can acquire new skills in everyday life, in a "learning by doing" manner, so to speak," Heinz Schwevers reports further.

Today, eight manual welders and QIROX RoboScan are in use in the company. "Programming is much easier with QIROX RoboScan," beams Marcel Bergkämper, a system operator for whom working with CLOOS robots is not new. He had already been able to gain many years of experience with them in another company and states: "What I previously had to program in a time-consuming way is now done automatically by the system. That makes my work a lot easier."